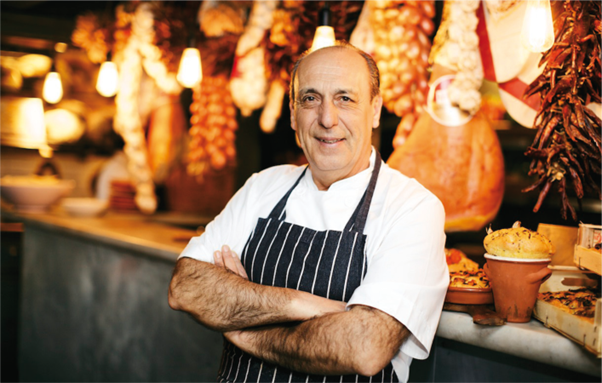 Gennaro will have a book signing at our next Ice Cream and Artisan Food Show 2023 on Wednesday 8th February 2023. More details to follow soon.

We’re pleased to be welcoming back celebrity chef Gennaro Contaldo to the Ice Cream and Artisan Food show in 2023, as well as being our very special guest at the ICA Awards Night Dinner! We, like many of you, have grown fond of Gennaro and are excited to see him again in Harrogate in February.

Celebrity chef, Gennaro Contaldo is widely known as the Italian legend, and is one of the UK’s best-loved chefs, as well as being the author of a dozen best-selling Italian recipe books. Born in Minori on the Amalfi Coast, Gennaro’s quintessentially Italian spirit and positive nature has made him a TV favourite. He regularly appears on Saturday Kitchen as well as his own TV show, the highly successful Two Greedy Italians, BBC2.
“The man cooks like an angel — and no ordinary angel’.”

Matthew Norman, Sunday Telegraph Gennaro has worked in some of London’s most popular restaurants, such as the late Antonio Carluccio’s ‘Neal Street Restaurant’. In 1999 he opened his own restaurant ‘Passione’ in Charlotte Street, London, which was awarded Best Italian restaurant in 2005. His first cookbook, ‘Passione’, published by Headline in 2003, won Best Italian Cook Book 2003 at the World Gourmand Cookbook
Awards and was shortlisted for the André Simon Award. He has since written many other books on Italian cooking. Gennaro’s Italian Bakery was published by Pavilion in 2016 and we’re delighted to announce that
a new edition of Gennaro’s first recipe book, ‘Passione’ is available now on Amazon.

Celebrity chef, Gennaro starred in ‘Jamie Cooks Italy‘, a culinary tour that explores favourite foods from some of the world’s favourite destinations, and In November 2021, he and Jamie were awarded the prestigious Stella della solidarietà italiana – Order of the Star of Italy – at the Italian Embassy. The honour recognises “outstanding contribution” to the preservation and promotion of Italian culture abroad.

Celebrity chef, Gennaro is a brand ambassador for Parmigiano Reggiano and Birra Moretti and works with Italian holiday company Citalia, helping promote the best of Italian food and travel to his beloved Italy. His latest book, ‘Gennaro’s Limoni’ published by Pavilion, is a foodie’s must, celebrating and sharing Gennaro’s love of lemons, Italy’s favourite fruit, and recipes that they star in.

When he’s not writing and teaching masterclasses at Jamie’s cooking school, he spends time relaxing and cooking with his family at their cottage in Norfolk (available for holiday rentals to foodies and their friends) and scouring Italy for new delights to share with his readers.

Gennaro will have a book signing at our next Ice Cream and Artisan Food Show 2023 on Wednesday 8th February 2023. More details to follow soon.